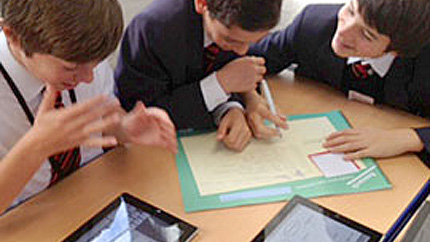 Last October boys from Years 8 and 9 entered the British Interactive Media Association (BIMA) Digital Day competition. This was a national event that enabled students to get to grips with designing apps and webpages, as well as an insight into the experience of a digital career.

The day began with all of the chosen students meeting in the library to be allocated into their groups. Each group was entered into a different competition, the topics of which ranged from creating a social media campaign to designing a mobile app of the future! Throughout the day students spent time in the IT and Graphics departments honing and developing their ideas, which were then neatly arranged and documented before being presented to the other groups. Each group also submitted their work to the national competition to be officially judged.

After many months of waiting, the results were finally released to the general public. The team LifeLink, consisting of Josh Jones, Peter Hughes, Theo Hill, George Corby, Redford Denson and Harry Franks, won the Digital Design challenge. The aim of this challenge was to design something digital that would benefit the local community. LifeLink's response to this was a project that linked younger people to members of the elderly population who needed jobs doing - therefore also decreasing unemployment levels. Another of our groups also came runner-up, the team QFree-Lunch came up with the idea of ordering your lunch with a mobile device to save long queues.

All of the boys involved had a very productive and enjoyable day learning all about the world of digital design and technology. A special thanks to the design company 'Tommy' who came in to school to aid the students whilst generating and developing their ideas.