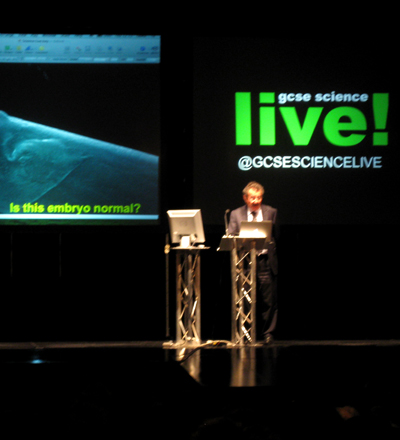 55 enthusiastic students and four staff made their way to London recently to bear witness to some extremely prestigious scientists talking about their specialist field and inspire them to carry science on to a higher level.

First was Ben Goldacre, the Guardian’s Bad Science columnist, who was a thorn in the side of sloppy scientific thinking, over-imaginative presentation of statistics and inadequate evidence.

Maggie Aderi was next up; a space scientist, and once a star of Blue Peter, who showed what was possible with real hard work, grit and determination having grown up in a less than privileged background.

For some staff the headline act was Professor Robert Winston, he needed no introduction and presented a very comprehensive account of fertility and the work that is being done surrounding it.

Professor Steve Jones, a leading research geneticist and prolific author with many books on evolution came on next. He followed the evolution of soap production machinery and language to highlight that of the evolution of different species.

The event was wrapped up by Professor Andrea Sella who not only spoke enthusiastically about chemical processes, but used chemical reactions on the stage to illustrate his ideas. Within this he focused on chemical equilibrium and how nature can benefit and in particular that of the stripes of the Zebra.

The day concluded with twitter communication amongst some of the speakers and the Biology twitter feed. An inspirational day was had by both students and staff.