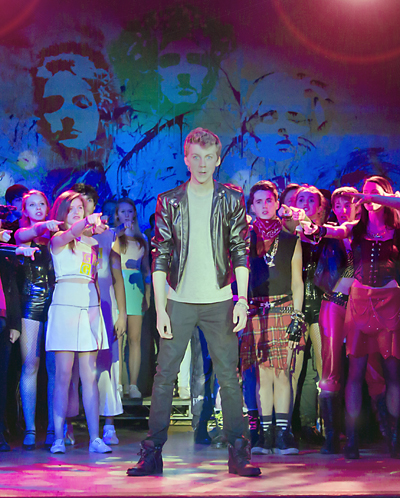 ‘We Will Rock You’, a musical based around Queen’s greatest hits, was performed masterfully by a cast of nearly one hundred young actors, dancers, and singers from both sides of the Challoner’s family last week. Preparations for the musical started at the end of last year when Sophie McCluskey, Kate Patel, and Ruby Morris from DCHS along with Sam Wilson, Scott Brooks, Alex Heath, and Stanley Devlin were cast in the principal roles. The rest of the cast were split into the five groups – Gaga Kids, Teen Queens, Super Yuppies, Bohemians and the Ensemble, and thereafter came the hard work to turn a school production into a performance that wouldn’t have been out of place in the West End of London.

Whilst the cast concentrated on their performances, the technical crew worked tirelessly to recreate the West End show, organising a breath-taking display of light and sound. Shankar Mall from DCGS designed the stunning artwork for the stage. Elliot Lewis and Edward Armstrong, along with Stage Managers from both schools ensured that everything ran smoothly. The students were guided and directed by the dedicated staff; Mr Flower, Miss Gallagher, Miss Ashton and Mr Holt and abetted by a team of other staff members who all helped make the performances look polished and professional. Of Course, no musical can work without the musical director and Mr Tansley was superb with his band of musicians.

By opening night, the cast were ready to tell the story of Galileo Figaro and his ‘Chick’ (Sam and Sophie) as they fought to reawaken Rock & Roll in a world dominated by pop. And what a story they told! Everyone performed to the highest level and the audiences were enthralled by the sheer professionalism of the show. Connor Flys, solo electric guitarist, will live long in their memories.