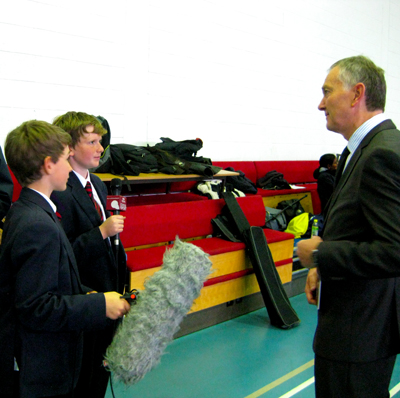 Thursday 21st March was the annual BBC School Report Day and a team of Year 9 students were amongst reporters from over 1000 schools investigating issues of concern to themselves and their peers. This is a wonderful opportunity for them to learn and develop reporting skills and they stayed for an hour after school every Wednesday for many weeks to prepare. The topics the students chose to report about ranged from 11+ tutoring and the GCSE curriculum changes to the impact of the recent horsemeat scandal and the Olympic legacy.

Whilst the team worked frantically to meet their production deadline, Alex Bear, Ben Webb and Patrick Marchant caught an early train for London to join BBC Radio Five Live Sports News Correspondent, Gordon Farquhar. They had an appointment with the BBC School Report camera crew, Richard Scudamore, CEO of the Premier League and the Sports Minister Hugh Robertson who were at London Metropolitan University to launch the Premier League Creating Chances Report. The Report provides a quick overview of the Premier League’s work in the community. It's not just engaging young people to play sport for the first time, it's getting them to continue their interest and commit to competition and sports coaching qualifications – over 2,600 have already been involved. Our students had rehearsed their questions and found a sympathetic audience.

It was a busy day for all the students involved, giving them a real insight of the pressures of reporting live news and you can read all about it on the BBC School Report web site.