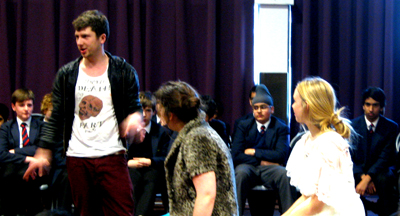 How would Shakespeare have presented ‘Romeo and Juliet’ in the 21st century, would he choose to set it in Elizabethan times, or maybe, in a more relevant way? This is a question posed by Jacob Merchant, a year 9 student, and his account of the visit.

When The Young Shakespeare Company came to Challoner’s to work with the Year 9 cohort, Romeo and Juliet came too. The performers decided to use Shakespeare’s words but present the show in modern day Britain, providing many laughs, as well as a greater understanding of the play. From the lively, romantic party, to the tense, aggressive fight between Romeo, Tybalt and Mercutio, this performance had great appeal to the younger generation. The company did well – drawing us in with unexpected sparks of humour. They involved everyone watching in a creative workshop, explaining the ‘light bulbs’ that lit up in their heads when, for example, they thought of performing Tybalt as a stubborn, grumpy and argumentative teenager. As mentioned, this realistic play was set in the 21st century.

So, to answer the first question, yes; Shakespeare may well have considered such a strange twist to this play. I’d even go as far as suggesting that maybe this was how ‘Romeo and Juliet’ was meant to be. Out with the old and in with the new.