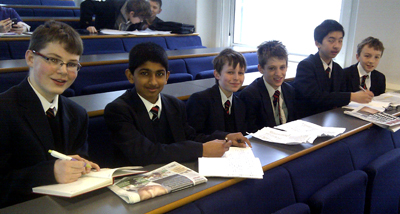 Last Saturday, six eager and eloquent students were given the chance to represent the school at the London round of ICYD (the International Competition for Young Debaters).

First they experienced a workshop on the basics of British Parliamentary debating from the judges, followed by an inspirational ‘show debate’ of UCL graduates arguing the motion ‘This house would ban eating meat’. Then it was their turn to prove their skills beginning with a very tricky first motion ‘This house would abolish the Euro’. All teams battled hard and argued well with Team A (Niall Jones and Prasanna Suresh) and Team B (Robert Hall and Thomas Packman) coming third, and Team C coming fourth in their debate. They were not disheartened though but spurred on to succeed in their next round arguing the motion ‘This house would invade Syria’. It was the turn of Team C (Ian Fan and Zach Yarrow) to shine this time, coming second as they put into practise all the feedback the judges had given them from the first round. Team A had a tough draw and came fourth and Team B came third again. All teams had an extremely steep learning curve to put in excellent performances in the final round on the motion ‘This house believes religion does, on balance, more harm than good’. Team A and C won their rooms and B took an admirable second place.

Overall, whilst they did not get through the finals, the students had a super day and learnt a huge amount about the skills of debating. All teams should be extremely proud of themselves, especially as the opposition were nearly all year 10 students. Debating for years 7-9 continues every Thursday lunchtime.