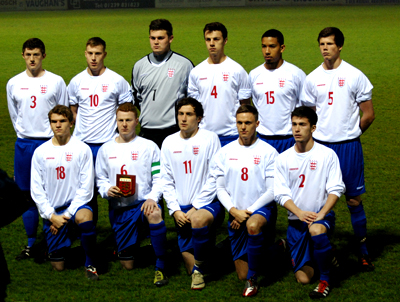 It was a proud moment for Challoner's on Friday evening, March 2nd, as Jack Pounce and Tom Fouhy of Year 13 represented England Schoolboys Under 18 in the Centenary Shield competition against Wales.

It has been a long journey for both students to reach this point in their footballing careers, involving a multitude of trial matches and a gruelling training camp in Villareal, Spain, over the half term break.

Jack was honoured further, as he was selected to lead England over the international campaign as captain. Both players started and ended the match against Wales, and despite a 1-0 defeat, both played with measured maturity on a difficult surface.

On Wednesday evening, March 7th, the team played a friendly against Poland at Dagenham and Redbridge FC with 20 Sixth Form students making the journey to support Jack and Tom. A 2-0 defeat was disappointing, but the Polish side were quick, strong and technically very good. Jack again led England well and Tom featured for the final half an hour.

Further matches in the Centenary Shield are away in Northern Ireland on March 23rd, before a much anticipated home match with Scotland at St James' Park in Newcastle on April 12th. The fixtures end at the AMEX Stadium in Brighton, against the Republic of Irelnad. The school is organising coaches and tickets for this final match on April 26th, if you would like to join us then please ask your son for a letter or contact the PE team.