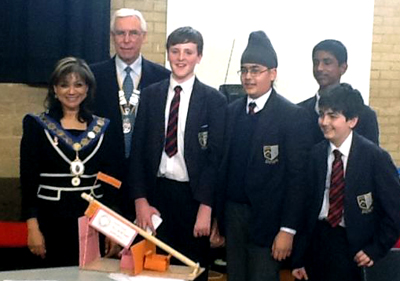 On Friday 2nd March, 12 design students went over to Amersham and Wycombe College for an event organised by the local Rotary Club for schools across the county.

Competing in their year groups, the students' brief was to create a charity themed ‘Coin Sorter' with the available materials which included wood, card, a glue gun, rubber bands, and putty. The students were keen to put their ultimate design skills to the test as they were competing against 26 other teams of designers. Every team had to create a portfolio as they went through each process which would also be judged. The Year 9’s needed to make a contraption that sorted out two different coins, the Year 11’s one had to sort four different coins, and the Sixth Formers had to ensure theirs sorted five different coins and also counted the money.

After working diligently for almost four hours, the teams finished their projects and the judging process began. After an anxious wait, the head judge announced that our year 11’s came third in their category and both Year 9’s and the Sixth formers came first, winning £25 of book vouchers. Well done to all the students that took part and for helping to make the event such a success.