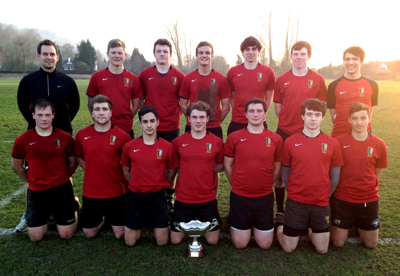 They started the tournament well against Henley College B and secured excellent possession, which they converted into points in a dominant opening display winning by 34 points to 0. In the second game against Lord Williams, the team conceded early points and were put under pressure, but responded perfectly scoring a couple of quick tries to win by 19 points to 10. In the last pool game against Windsor Boys team they scored 6 tries, whilst only conceding 2, therefore winning 31 – 14 and completing an unbeaten pool stage. In the Semi-Final, they beat Claire’s Court 31-0 and then faced Windsor Boys in the Final, creating a repeat of the earlier pool game. They scored a couple of early tries before Windsor came back into the game with a converted try. Challoner’s continued to play with confidence and scored a couple of tries at the end to confirm their victory by 24 points to 7 to retain the trophy and title that they won 12 months ago. The team scored 23 tries and conceded only 5 on their way to the title.

During the tournament, they played extremely well in all games but the trophy was a reward for an outstanding squad effort, not only there, but over the whole season. Congratulations to the squad of: Jack Heeney, Sam Cartwright, Michael Carne, George Shiel, Ben Barratt, James Perkins, Will Dent, Lewis Cornelius, Josh Porter, Mark Roberts, Pat Rigby and Captain Max Rouse.