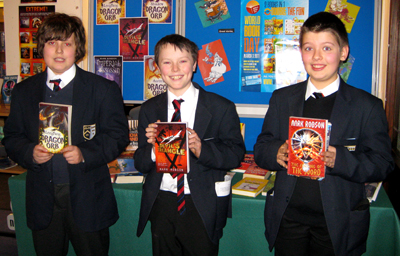 Visitors to the LIC were encouraged to recommend their favourite books in the lead up to World Book Day and it was fascinating to see how diverse their choices were when all the books and magazines were put out on display.

To celebrate World Book Day, the LIC hosted inspirational teenage fiction writer, Mark Robson, to enthuse and excite year seven classes in the art of short story writing. He gave key tips on how to begin - by introducing a character and a problem - and how to avoid listing facts. With individual laptops, classes created exciting openings which were then projected up on the screen for the whole class to work on together, giving them the opportunity to learn from each other. Mark’s enthusiasm for writing was infectious throughout the day, and he divulged the tricks of the trade which especially inspired the budding novelists. Overwhelmingly, year seven agreed that it was a really interesting and enjoyable day of learning about creative writing. Mark spent time during break and lunch talking to students from all year groups about life as an author and signed copies of his novels such as the ‘Dragon Orb’ series and his newly released ‘Devil’s Triangle’ which students were able to pre-order.

We are committed to promoting the joy of reading and believe students gain a great deal by participating in events such as this-a successful day was had by all!