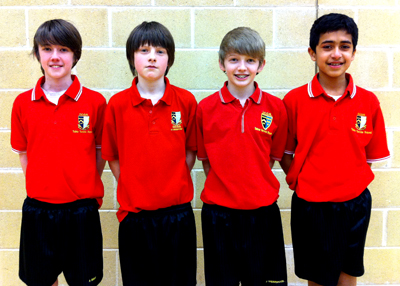 Our Under 13 Table Tennis team continued their march towards a place in the National Finals with an impressive team performance during the Regional Finals, held at Cheltenham Boys’ College on Sunday 6th March.

The team of Alex Nagle, Joe Underwood, Tarun Chana and Harrison Simmons had already won the Zone Final at the start of the year with some impressive table tennis so they were in good spirits heading into the tournament. This was tested at the start of the day due to illness and a long journey to Cheltenham. After a brief warm up, their confidence had grown and they knew that if they could replicate their early season form they would stand a good chance of progressing through to the National Finals.

In the opening game Joe recorded an impressive 3-2 victory against Tanbridge’s number 1 player with Alex following with another win. Tarun and Harrison kept up the positive start with equally good performances to record victories in their opening games. The team continued to win and entered the final game knowing that a victory against Haygrove School would secure the Regional Title and a chance at competing for the National Team Title. Each student secured winning points to keep them ahead of their opponents and finally managed to secure a 6-2 overall victory to achieve the impressive feat of becoming Regional Champions. They should be immensely proud of their achievement in winning the Bucks Championships, Zone Finals and Regional Finals. The team will now play London Academy, Altrincham Grammar School and Valley School for the National Title in Leicester, on Saturday 19th March.