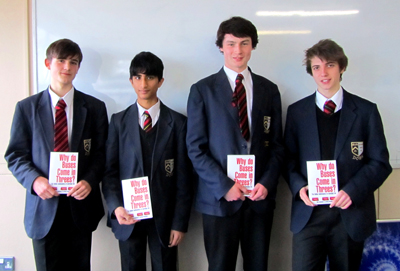 The competition had two separate rounds: the first being a problem-solving round with 15 challenging questions; the second involved constructing a poster based on the topic of symmetry which also required the students to answer three questions of substantial difficulty on that topic. Our team won the problem-solving part of the competition outright with an excellent score of 55 and were awarded signed copies of a book by the renowned mathematics writer, Rob Eastaway. In the poster round, the quality of the boys’ Maths was as good as the best, but they did not quite match the presentation level of the winning group.

This is the second year running that Dr Challoner’s has won the problem-solving competition. The students should be very proud of their victory which is a very impressive achievement given the standard of the competition.