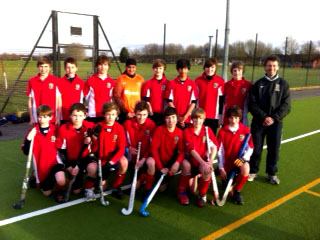 On Wednesday 16th February the team played against Stowe School in the final of the Under 14 Hockey County Cup. In order to get to the final the team had beaten Sir William Borlase 7-0 in the quarter final before winning a very tight game against Royal Grammar School 2-1.

This was the team’s tenth game of the season and they had won 7, drawn 1 and lost 1 prior to the final. The draw had been a 5-5 thriller away against Stowe with Challoner’s being caught on the break 5 times despite having the lion’s share of the possession, so the team knew they were up against a very athletic side. The first half of the final saw our team dominating possession but Stowe scored a breakaway goal to lead 1-0. Eventually the Challoner’s possession was converted into a goal and the sides went in at half time level. In the second half Challoner’s dominated and scored 3 goals in quick succession securing a comfortable 4-1 victory.

The team now go to Surbiton Hockey Club for the Regional finals in March where they will be only one of two state schools competing against 14 other teams. We wish them well.