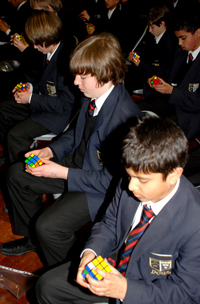 On Wednesday 17th March, 140 students gathered in the hall in an attempt to break the record for the largest number of people simultaneously solving Rubik's Cubes. Not only did we beat the current record by a considerable margin, but we managed to do so within three minutes of the starting whistle!

The record was launched in December and since then students have fully risen to the challenge of mastering the cube. Although a large number felt like giving up, the camaraderie and dedication of the students involved has been outstanding. This is a fantastic achievement and demonstrates what our students are capable of when they persevere with something difficult.

Representatives from Seven Towns, the UK-based company who hold the worldwide rights for the Rubik's Cube, and Drummond Park, the UK manufacturers, were present to verify the record. There were also journalists and photographers from BBC Three Counties Radio and Bucks Newspapers who interviewed several students. A big thank-you to the staff and sixth-formers who gave up so much of their time to help make this event an overwhelming success.