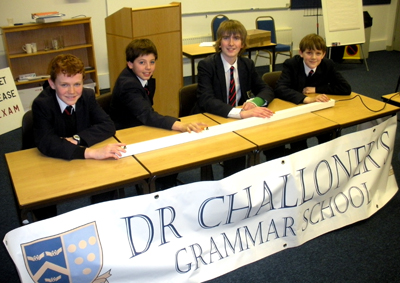 Following the successful inter house University Challenge competition, a team of students from Years 7 and 8 travelled to Magdalen College School on 23rd March to take part in the Home Counties Regional round of the Schools Challenge.

Having honed their general knowledge skills to perfection during the car journey to Oxford, the team stormed through their first group game winning by a comfortable margin of 430 to 230. In the second game, Challoner’s completed a demolition of Aldenham School, racking up 400 points to their opponents’ 70. This meant that Challoner’s qualified for the final against Aldwickbury School in Harpenden who had defeated the hosts in the other group. In the final, our opponents quickly proved to have one player who was amazingly quick on the buzzer and although we knew most of the answers to the starter questions, we kept on losing out by a fraction of a second. We battled back well, often answering correctly the bonus questions which had defeated our opponents, but the gap eventually proved too wide and we ended up losing by 340 to 580 after a hard fought 30 minute exchange.

The team of Elliott Christensen, Ned Robertson, Ciaran Walsh and Captain Elliott Gravestock demonstrated some amazing general knowledge during the competition and can be very proud indeed of their performance which earned them the runners up spot.