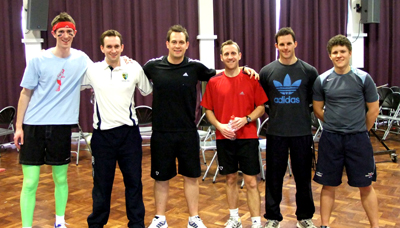 Jointly hosted by Challoner’s 4 Charity and the Global Issues Action Team, the challengers for the coveted title of Dr Challoner’s Strongest Teacher were Messrs Curran, Runswick, Duggan, Pontin, Colquhoun and Deadman. The date was set for Thursday 19th March and they all became very anxious to win; entering training regimes and bribing the organisers for a look at the tasks involved. These included a test of muscular endurance by holding a 10kg weight in front of you for as long as possible, a test of manual dexterity and tidal volume by blowing up balloons, press ups, shuttle runs carrying weights, all culminating in a race against the clock to load, and unload, a whole chair rack.

Special mention must go to the heroic Mr Curran, for sporting some Maori warrior war paint, a bandana, and some very fetching fluorescent green tights. Also to Mr Duggan for his unorthodox method of unloading chairs from the rack, and Mr Pontin for his press ups! The winner, Mr Duggan gained a deserved victory closely followed by Mr Deadman.

The event was immensely popular, and the hard work involved in the organisation was deemed worth while when it was announced that they had raised a fantastic sum of £100! These funds will be shared equally between Sport Relief, and a local charity called Kids in Sport .This event has already been rescheduled for next year so hopefully we can look to increase charity donations and teacher’s fitness!