Cooking up a Competition 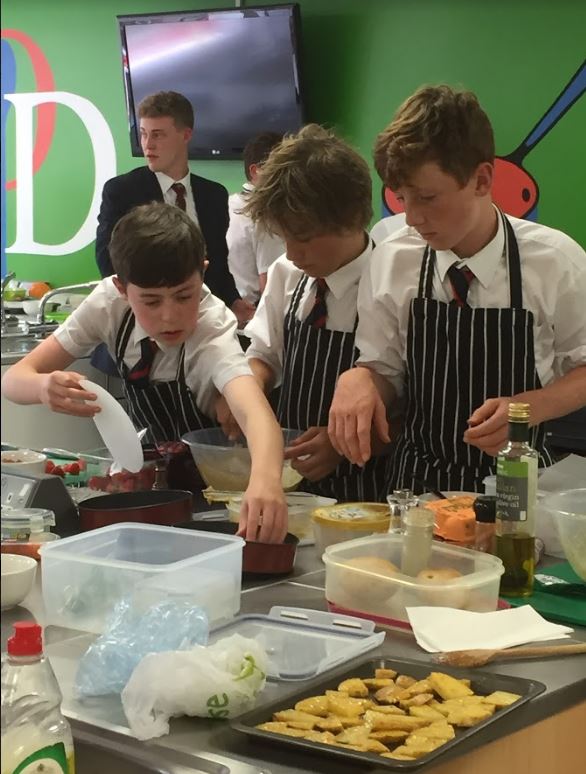 This past week saw the fiercely competitive House Cooking event for Year 8. The brief was simple; a healthy two course meal for two. However what made it harder is that the time limit was just 35 minutes!

Points were awarded for the menu ideas, taste and texture, organisation and presentation. Students displayed many of the attitudes associated with learning at Challoner's - collaboration and resilience were key, especially on such a hot day!

All the house captains came along to support their house and Mrs Challis and Mrs Atkinson were invited to help judge - everyone was very impressed by the skills displayed by the teams.

An array of dishes were produced, from fishcake burgers to homemade wedges. It was agreed all the teams had been very innovative with their recipes but what really mattered was if the ambitious plans paid off.

The winners were 8 Thorne, made up of Rory, Ben and Navtej, who got a maximum 20 points. Their dish was a prosciutto and pesto cod gratin with a banana-themed dessert - an advanced recipe! Their success was a result of a timed schedule they followed to the second.

Thorne were closely followed by Rayner and Foxell who both scored 18 points. Newman and Pearson also did very well. Thanks go to Mrs Swain, Mrs Challis, Mr Atkinson and Mr Ambrose for making the contest enjoyable.