Shakespeare gets a cartoon makeover 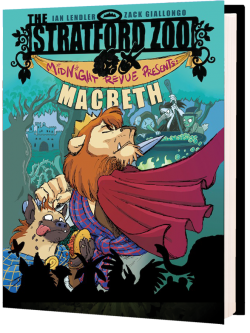 When Ian Lendler visited our school this week, most of the seats in the library were filled - by students of all years - as he talked about his career as a graphic novelist.

Lendler's most recent pursuit as a writer, and the focus of his visit, has been adaptations of Shakespeare's plays - as performed by the animals of Stratford Zoo. His first publication in this theme was Macbeth.

He described the process to us: after writing, the script gets sent to the artist and he takes around half a year designing the characters and the other half drawing the frames in the book. Lendler noted that in a graphic novel the artist - in this case Zack Giallongo - as such does most of the work.

Ian Lendler is presently about to publish the second book in this series, adapting Romeo and Juliet: a tale of a rooster (Romeo) and a bear (Juliet), that everyone is eager to read.