Debates and deception at the Model UN

This week eight students from DCGS travelled to the Oculus in Aylesbury to take part in a Model United Nations (MUN) event.

We had previously attended two training sessions, as well as having written a position paper for the country we were representing. Each country was represented by three people, working together to resolve the question: ‘What limitations should be imposed on freedom of speech in an age of terrorism?’ With no two DCGS students on the same team, we were all working with people we had never met before. 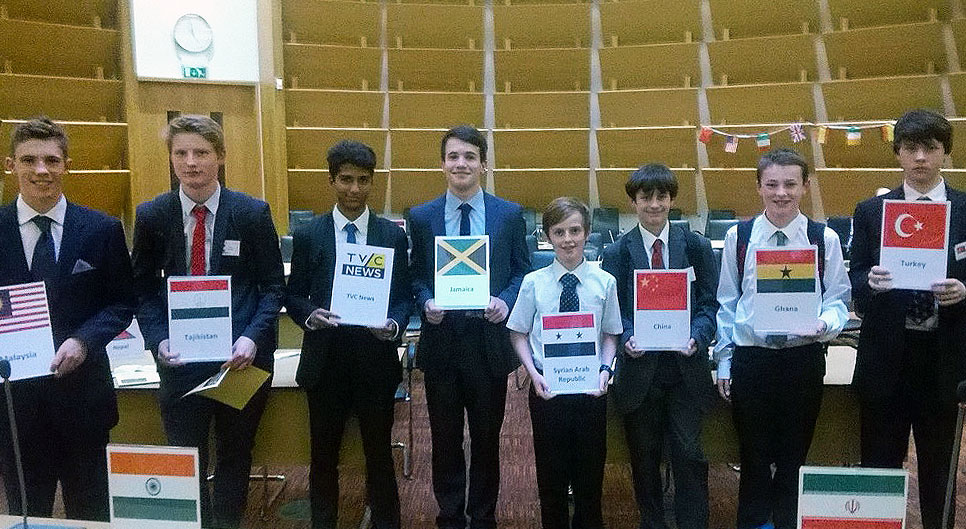 The day started with a representative from each country giving a speech on their country's position. These ranged from the Swedish ‘We should have no limitations’ position to the Syrian ‘We should end freedom of speech altogether’ statement. As soon as the opening statements concluded, a fierce debate erupted between the countries. Things soon got personal as a UK delegate suggested that a Turkish representative was stupid! Thankfully, the Secretary General calmed things down before things could get much worse. Unfortunately for America, the press Twitter feeds could not be calmed and got more and more provocative until America gave in and launched a campaign against Russia.

The best tweet of the day, by far, was from MUN Fox News, responding to China accusing it of being corrupt, stating: ‘China must be corrupt - after all, it’s communist!’

During the debating sessions countries could send each other mail - delivered by teachers. With these, alliances were set up - the most controversial by far was the AAA, set up by Syria, with AAA standing for the Anti-American Alliance. However, this soon collapsed and many new alliances were created, the most successful being the Anti-Suppression Alliance and the Moderation in Censorship Alliance.

Thankfully, the final vote didn’t count in the real United Nations because if it did then we would no longer have freedom of speech on the internet – a point we all reflected on at the end of the day.

All of us gained a huge amount of debating experience from MUN and it is something I would highly recommend to anyone interested in current affairs, economics and world politics.