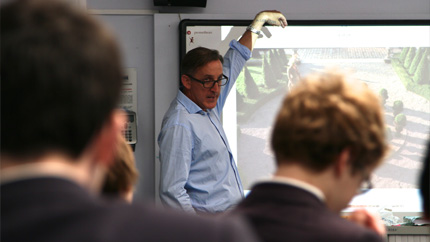 On Tuesday the 17th June, the father of one of the boys in Year 9 came in to Graphics to talk about his work. James Merrifield is a production designer in the film industry. He showed us his two most recent films which are coming out in September and February: 'A Little Bit of Chaos' and 'Mordecai'. He explained what he had to do for the films, for instance 'A Little Bit of Chaos' was set in France but was actually filmed in Ham House in London. He had to design new buildings, walls, façades and interiors for the film, for example creating a gate for the house to fit the director's requirements, matching what it would look like in France.

The owner of the house in real life loved big plants, so Mr Merrifield had to design fake topiary to put in the garden otherwise they would only have a week to work with them. He also showed us some drawn work he’d made, like the floor plan for the house the main character stays in. It was really interesting to see what we learn in school get transferred to actual life jobs! The Year 12s really benefitted from it as well as their recent project is on creating 3D spaces. It was a really great talk and we're very glad he came in.