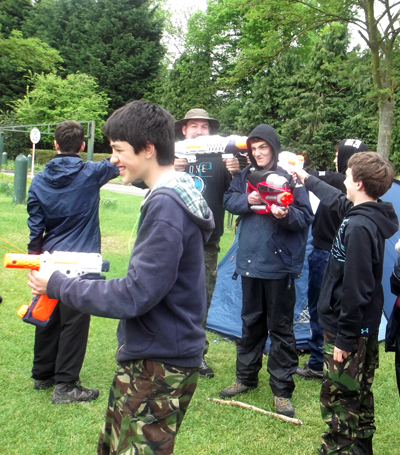 18 members of Year 9 decided to test their mettle against the gruelling challenge that is the Ridgeway, a visit that is second only to Morocco in its level of difficulty for those taking part. The cool weather with occasional light showers at the start of the week made it much more bearable for the students during the days, but the nights were very cold and much harder to endure. On two nights the temperature dropped to 2 degrees which was totally unexpected for May.

Challenges were both physical and cerebral, testing the student’s determination, perseverance and often, flexible thinking. While on the first day teams were fractious and disorganised, by the end of the week, they were a well-oiled machine. They particularly loved the militaristic nature of the challenges and the thought that had gone into the scenarios, but by far their favourite activity was the Ambush and running water fights (including a seven way Mexican stand off and a firing squad for Mr Burn).

Sadly, the weather took a turn for the worse on the final day and the very strong winds up on the Ridgeway meant the teams did not make it to the top of the Ivinghoe Beacon, but all of them deserve credit for their achievements and the effort they put in.