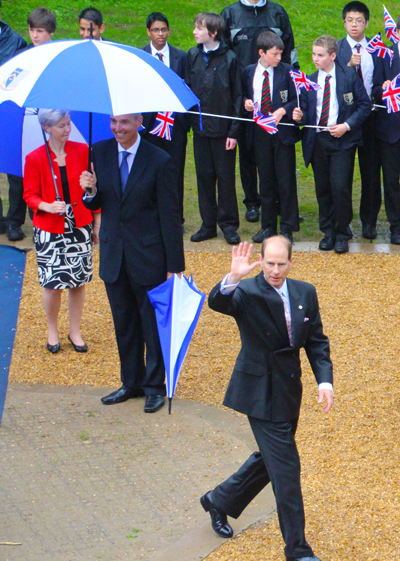 We were delighted that HRH the Earl of Wessex joined us on 20th June 2013 to perform the official opening ceremony of the Sixth Form Centre and Milton Library.

After the official introductions to the Leaders of the County Council, District Council, MP and Mayor, Dr Fenton and the Governors began the school tour. His Royal Highness was generous with his time, speaking to many of the students who lined the route to the Loarridge Centre, giving them a day to remember. After lunch, he emerged to meet School Captain Nicholas Brabbs and Deputy School Captains Henry Bugg and Hershil Patel, before embarking on his tour of the new building. On the Learning Level, he met Ethan Harris, Jack Metcalfe and Michael Woods, who presented their Extended Projects, before moving to the Library to be serenaded by the Jazz Band. There he met Year 9 students who had completed Activities Week trips just before half term. By now, it was raining steadily, but he still made time to walk over to the quad to speak with students participating in the Duke of Edinburgh Awards Scheme, of which he is a Trustee.

His last duty for us was the official opening. He returned to unveil the beautiful plaque in the foyer of the Sixth Form Centre. After years in the planning, the new facilities were officially opened.