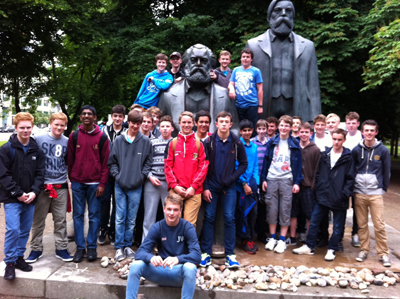 At 6am on the Monday of May half term, thirty Year 10 students set out on the annual History visit to Berlin.

Staying in a hotel which occupies a site once within the 'death strip' next to the Berlin Wall, the group made full use of the city's excellent public transport to embark on a varied programme of historical sites. These ranged from the Nazi concentration camp at Sachsenhausen to the iconic Cold War symbol of East Berlin, the TV tower. A particular highlight of the trip was a behind-the-scenes tour of the Olympic Stadium, which not only was the scene of Jesse Owens' triumph at the 1936 Olympics, but was also preparing to host football's German Cup Final a few days after their visit.

The students were moved and inspired by the sights they saw and returned home keen to start the next part of the History course.