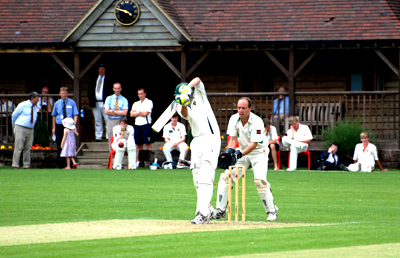 In the annual fixture between Dr Challoner’s 1st XI and the MCC, the visitors batted first and soon found the schoolboys’ attack too hot to handle.

An early wicket apiece from seamers Jack Roberts (1-24) and Ashley Turney (1-11) put the MCC batsmen under pressure, with only Amersham CC’s Chris Fleming (43) showing much resistance. The introduction of spin posed an even greater threat with Matt Rance (2-30) and Izhan Khan (1-17) tying up the Longfield Drive end. However, it was 15 year old Robin Collins who stole the show with 17 overs of often unplayable leg-spin which stopped the MCC innings in its tracks. As the visitors slumped to a meagre 126 all out, Robin bagged a superb 5-34 making him the first Challoner’s bowler ever to take five wickets in the MCC match.

Chasing a modest 127, the school’s openers started in positive vein with captain Matt Rance driving the first ball through the covers for a boundary. Despite the early loss of the prolific Alex Morgan, there were few alarms for the school batsmen and the winning runs came off the bat of Andy Dunning in the form of an imperious straight six. Matt Rance made a classy 67 not out as the school emerged victorious for the second year in a row and by the comfortable margin of 7 wickets.