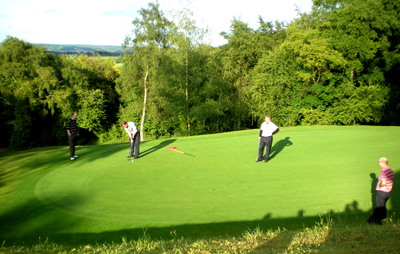 The inaugural Friends of DCGS Golf Day was held during half term at Chiltern Forest Golf Day.

Competition was fierce as contests for the overall winner, victors for the front and back nine, longest drive and nearest the pin were held. Mr Sturgeon and Mr Buckridge led the way for the staff, claiming the overall title and the longest drive trophies respectively, while Guy Morgan and Sean Brew triumphed on the front and back nines respectively. The weather was glorious, some good golf was played and the event ended with a delicious supper overlooking the Chiltern Hills.

The photograph shows Andy Quinn putting on the 18th green as the remainder of his four ball look on. Needless to say the lengthy putt shown rattled straight into the hole. Look out for details about the next Friends golf day which will take place in the October half term.