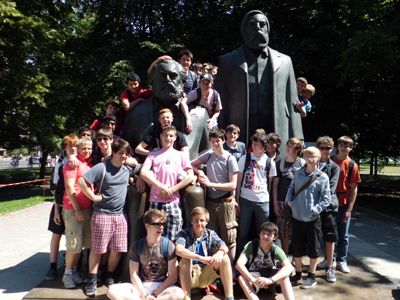 Over the May Half term break, a group of 60 Year 10 students and six staff took part in the annual History visit to Berlin.

Greeted with glorious weather in the German capital, the students embarked on a comprehensive programme of historical sites, ranging in time from the Nazi concentration camp at Sachsenhausen to the KGB prison in Potsdam which was active as recently as 1994. In between such serious sightseeing, the students enjoyed some more light-hearted activities such as ascending the iconic 1960s TV Tower where several of them braved the rather fierce staff to eat cake in the revolving restaurant!

As usual, all the students were brilliantly well behaved and arrived back tired but inspired by what they had seen.