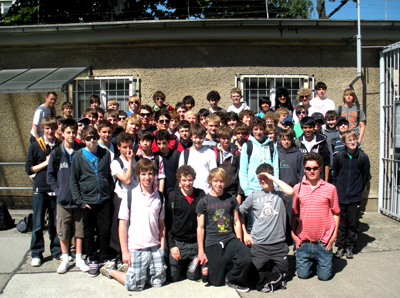 Over Half Term, a group of sixty year 10 students ran the gauntlet of the British Airways strike and spent four days in Berlin raking over the history of the Nazi and Cold War periods in German history.

First stop was Alexanderplatz, from where they were given a walking tour of the city, taking in sites such as the Brandenburg Gate, the Holocaust Memorial, the Gestapo Headquarters and the remainder of the Berlin Wall. Students were surprised at the size of the Olympic Stadium, built for the 1936 Olympics and renovated for the 2006 football World Cup, and very moved during a visit to Sachsenhausen, a Nazi Concentration Camp. One evening they ascended the TV Tower in the very centre of Berlin, which had a jaw-dropping 360o view of the city and another time they went off bowling.

Students learnt about the 'final solution' at the Wannsee Conference house, and then travelled to the location of the Potsdam Conference, where final decisions were made about Germany after World War II. On the final day, they were shown around Stasi Prison, where over a hundred political prisoners could be interrogated at the same time by the East German secret police. The day finished on a lighter note when Dr Fenton suggested a trip to a Currywurst museum to pay tribute to his favourite German dish! The visit ended with a visit to the Soviet war memorial, and everyone arrived back at school full of enthusiasm for the History GCSE exam ahead of them.