On the 2nd of July, 29 Year 12 students travelled to the Brecon Beacons, Wales, to complete their qualifying expedition for the Duke of Edinburgh’s Award. At Gold, participants are expected to be self-sufficient for at least four days and three nights, obeying the strict 20 conditions needed to complete the award successfully.

Many tired faces were visible at 8:30 on the Saturday morning as the students departed school – having completed a hectic week that involved the SSO Leadership Summit, the Higher Education Conference, and Year 12 Open Morning. Arriving at Hay-on-Wye in the early afternoon, the Ocean Rock instructors greeted us, explaining the itinerary for the coming days. Following a rigorous kit check – which mostly involved removing excessive amounts of clothing from our bags – we all enjoyed our ‘last day’ at a local pub before we embarked on our expedition the following morning.

Our first qualifying day involved a ~20km walk across varied terrains: from river gulley’s to mountain footpaths, challenging our fitness and mental resilience – and that was only the first day. Navigating our way down a gusty hill path, the teams took a significant break next to a stream, with many falling asleep having taken their heavy bags off. Upon finishing the first long day of walking, it is fair to say many of us were underwhelmed with that evening’s campsite: a hole in the ground was to be our toilet, and a small river was to serve as our shower. However, after the initial shock (especially compared to our lavish first campsite), we enjoyed an evening of 'catch' at the campsite, before tucking into dinner. The evening was unfortunately cut short as we failed to realise that pitching our tents next to the river was to encourage a swarm of midges, forcing a hasty retreat into the tents.

Monday involved the most challenging day of walking – two 400m four steep hill ascents – both in the sweltering midday heat. The first hill ascent was the moment when teams evidently had differing approaches: some teams took a direct ascent with more breaks compared to other teams who took a more gradual path with fewer breaks. The teams then took a break at the top of the hill, snacking and applying sun cream, before proceeding to the next incline. Team 2, with their competitive approach of walking as fast as possible, powered through the hills at an astounding pace; Team 3 decided to take in the scenery and proceeded to take a short nap; the other teams narrowly trailed behind. We were fortunate to have a campsite next to the Llanthony Priory, which we toured and admired with its impressive design. The evening that followed was thoroughly enjoyable. Joined by two other schools at camp, we played in an improvised version of softball – using a stick as a bat and our bags as bases. Winning a decisive victory, our DCGS team returned to the tents for the evening, pleased with both their win and the fact that the next day was the last day of intense hill climbing.

Setting off on Tuesday morning, the teams were upbeat, knowing the end of the expedition was in sight. However, overjoyed with the progress made so far, Tuesday marked the first day in which several teams successively made minor navigational errors. Team 5 immediately took a wrong turn but were able to quickly identify this and made their way back onto the path. Climbing the last significant hill - although not as steep as those on Sunday - was exhausting for many. Our legs trembled as we panted our way up. Once reaching the summit, we were all relieved, knowing the route was all now downhill. Continuing along the long hill path, teams again began to diverge in their navigation – with some heading downhill toward the dam and others continuing on the footpath. The Ocean Rock instructors were able to redirect the teams to the correct footpath, where the teams made their way to the final campsite. Here, many of the teams worked tirelessly on their aim (a distinguishing factor of the Gold Award compared to Bronze and Silver). A range of aims were investigations: Team 2 mapping their moods throughout the expedition, and Team 5 tracking levels of pollution and human disturbances to the natural environment, to name a couple.

Wednesday marked our final day of the expedition. Both excited to get home and somewhat melancholy to move on from the amazing time we had over the previous days. Team 2 was so eager that they reached the final checkpoint one and a half hours early, subsequently being made to walk an additional 4km to meet the strict DofE Gold conditions. Following a presentation of our aims to the Ocean Rock Instructors, we scrambled to the coach, where we sat down on the first comfortable seats in days. Being isolated from the world and media for five days meant we missed a lot happening in the world - including the new developments in UK Politics. After thought-provoking discussions about the news on the coach back, all debate halted when we reached the services. A collective swarm towards Costa, KFC and Burger King resulted. On the second half of the coach journey back, feeling bloated from our feast, many teams caught up on some much-needed sleep. Arriving back at school in good time, we tiredly marched off the coach, picking up our bags, ready to get back into the school routine the next morning.

Thank you to the fantastic Ocean Rock team and Mr Sharp for allowing the expedition to be so enjoyable and successful. 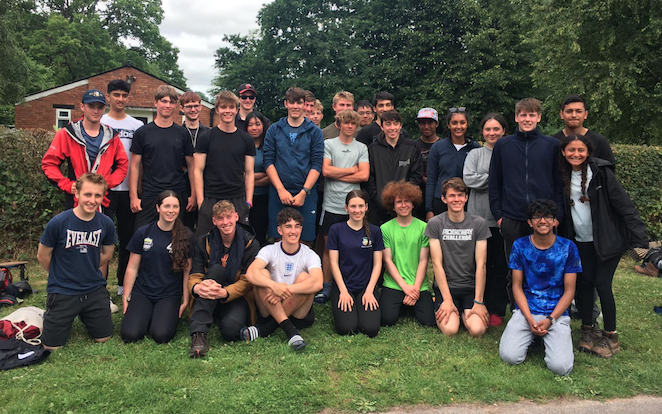