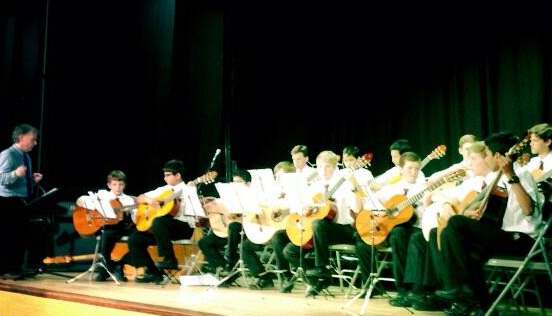 On a swelteringly hot evening, a large number of students from Years 7 to 10 took part in the Junior Concert, a key item of the school calendar. Super Strings performed ﬁrst with the very popular 'Kashmir' by Led Zeppelin, lending it a more upbeat mood than the original! Later, the hugely anticipated Ukulele Ensemble performed two songs. The ﬁrst was 'Brazil', appropriate for the current World Cup, and the second was the old favourite 'I Can See Clearly Now', accompanied by Mr Tansley on the double bass.

Many Year 10 groups performed pieces as part of their GCSE course. The self-descriptive Pop Trio played 'The Man' by Aloe Blacc, while The Watermelon Men demonstrated their specialty by playing 'The Watermelon Man'.

Additionally to these groups, during the evening there were two choirs: Junior Choir and a choir consisting of more than 100 Year 7 students. Junior Choir sang the song 'Walk Like A Man' and the Year 7 choir ﬁnished the concert with 'Happy'. As usual, the Year 7 choir was incredibly popular and got a well-deserved roaring round of applause.