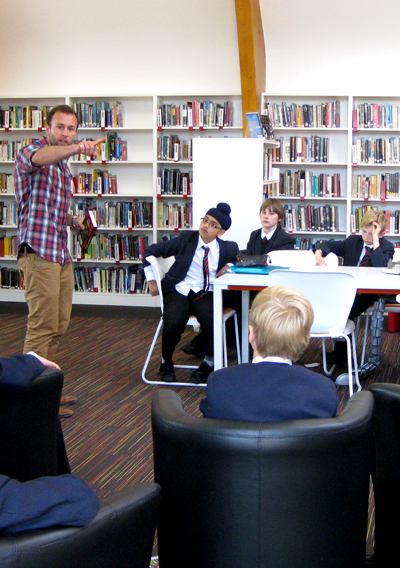 The Milton Library invited Rob Lloyd Jones, an old Challoner and successful writer and editor to speak last week about life as an author and his first novel 'Wild Boy'.

Rob studied Egyptology and Archaeology at university and then went travelling, coming back with so many interesting stories that he decided to start writing them down. He has gone on to write over 30 books for children for Usborne Publishers, including historical non-fiction and adaptations but 'Wild Boy' is his first novel. He explained how a book finally gets to be published and the lengthy process involving many people such as historians, who check each fact, and various editors. It gave the students a real insight into the world of editing and publishing and Rob’s enthusiasm for his job shone through. The students asked Rob lots of questions about how he came up with ideas for Wild Boy, a mystery adventure story set in the underworld of Victorian London, and were excited to learn that it may be made into a film.

It was great to have an old Challoner back to inspire the present students and they’re already waiting for Rob to finish the sequel, Wild Boy and The Black Terror, which will be published in 2014.