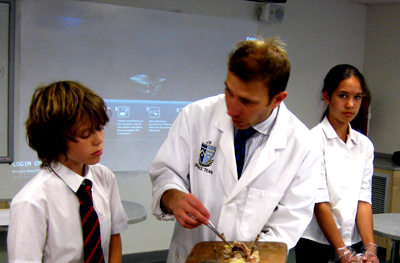 In the morning the students took part in a choice of exciting workshops and, in the afternoon, they planned, scripted and made their own science films. The day is probably best summed up in the words of one of our young visitors: “We went to a triple science day at Challoner’s.It was fun and we made friends, dissected rats and found new uses for spaghetti! To begin we went to either dissect rats, explode things or to do experiments with cups. We moved to another activity which could be dissection again or nanotechnology or forensic science before lunch in the canteen. But the highlight of the day was making a film about the digestive system with rubber pipes, spaghetti, tights and beads. I have to admit that even though cutting up a rat isn’t my preferred activity, it made science pretty fun.”

DCGS biologist Mr Buckridge is well known across county for his impressive dissection skills and his 'Rat' workshop had to be repeated to cope with demand!