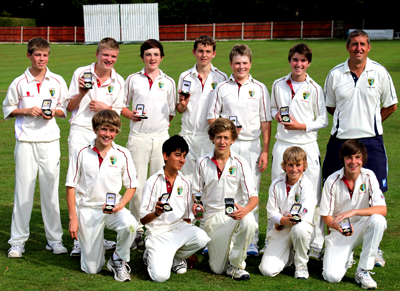 After beating RGS, High Wycombe comfortably in the semi-final, hopes were high going into the game which was played at Chesham Cricket Club. AGS won the toss and elected to field first, a decision that proved costly as Oliver Penton and Tom Player put on 104 runs for the first wicket before Oliver was out for 54. Tom fell just short of his half century but Paddy Keogh, Tom Rohner and George Burke all chipped in with quick runs at the end to help post a score of 175-3 off 30 overs. The AGS innings started disastrously thanks to some fantastic bowling by Henry Quinn and Adam Crossley who took 3 wickets each to reduce AGS to 17-7! Asad Rehman, Will Reid and Jordan Huggett finished the innings off and AGS were bowled out for just 51 runs to give Challoner's an emphatic victory.

It has been a very successful season for this Year 9 team who have won the majority of their matches. As County Champions, they will play in the Lords Taverners Trophy next season, a National Cup for all county winners. Congratulations to the whole team.