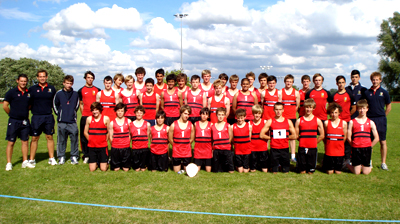 The season’s finale was the District Athletics held at Hillingdon Stadium and the 40 students involved had to compete well to follow previous year’s perfomances.

The Year 7’s got off to great start and won their event; Dan Richards (200m), Will Perkin (800m and High Jump), Robert Hall (1500m), Joe Tunney (Shot) and the Relay quartet of Gethin Ross, Dan Richards, Ben Paton and Will Perkin all gained 1st place positions. In the Year 8 competition the students matched the Year 7’s by winning their event. Matt Sperling (100m and Long Jump), Harry Goss (High Jump) and Max Collingbourne (Shot) all came first with others gaining a host of top 3 finishes. Year 9 students rose to the challenge and performed excellently to win their group. There were 1st place victories for James White (100m and 200m), Jack Hughes (100m), James McCarthy (800m), James Wilson (Triple Jump), James Bunker (Shot), Armaan Sandhu (Discus) and the relay team of James White, Jack Hughes, Alex Peck and James McCarthy. The pressure was on the Year 10 and 11 athletes to complete the clean sweep. These students did not disappoint and secured Challoner’s 4th age group victory. Along with the Year 8 students, they secured a number of top 3 finishes, with Nick Brabbs (200m) and Ashley Turney (400m) winning their events.

Through the consistent and excellent performances by the students over the whole day, in every event, the team were able to secure the overall Boys Trophy for the 10th Year in a row, a fantastic achievement.