Summer Play - a Success in the making! 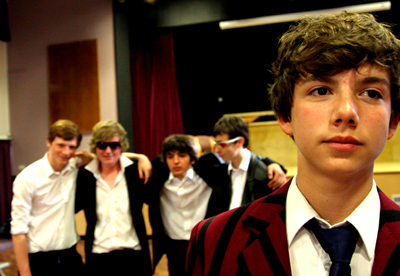 As the term draws to a close, students from Years 8-10 are preparing for an opening night on 15 July as they enter final rehearsals for this year's Summer Play, Success - which promises to be a celebration of the creativity of younger Challoner's students.

With a backdrop of the credit crunch, Success tells the story of Tom Rakewell, a young man dazzled by money, who has made his wealth in the harsh world of boom and bust. Determined to cement his place amongst the city elite, he finds himself embroiled in a never ending cycle of staggering risks – until he takes the biggest gamble of his life. Part fairytale, part morality play, Success is a brand new play, very much in the modern world and completely contemporary in its themes.

This production showcases the creative talents of over sixty students from Years 8 - 10, including members of Dr Challoner’s High School. Not only are students acting but they have produced almost every aspect of the production, including publicity, programmes, video, music, lights and sound, with some help from members of the Sixth Form. The play runs from 15th to 17th July, starting at 7.30pm, and is most suited to those of secondary school age and over.