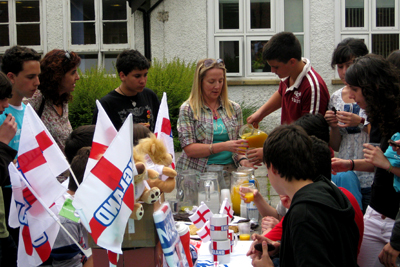 The inaugural exchange with IES La Flota, Murcia was a ground-breaking experience for Challoner’s. The interaction between the Challoner’s and La Flota students was outstanding, communicating in a vibrant mix of Spanish and English. Once the learning curve had been achieved, friendships began to quickly emerge.

The Spanish students were enthralled by the trips that were organised for them, including two visits to London, and they thoroughly enjoyed going bowling and to an amusement park which was arranged by the Challoner’s partners. In addition, the Graphics, PE and Science teams organised extra activities for the Spanish students. The highlight of the exchange was the team-building exercise that involved the La Flota and Challoner's students working together in teams to create a brand, complete with jingles, a badge and more!

This first ever Spanish exchange for Dr. Challoner’s Grammar School has set a new standard, with prospects of future exchanges exciting both the staff in the Modern Languages Team and the students themselves. They are now looking forward to their visit to Murcia in February.