In Challoner's biggest victory in debating history, Year 13 debating legends Matt Cooke and James Wroe have defeated national champions Eton College to reach the third round of the prestigous School's Mace debating tournament - the furthest any Challoner's team has ever reached. Read the incredible report below, detailing their journey for this historic fixture. 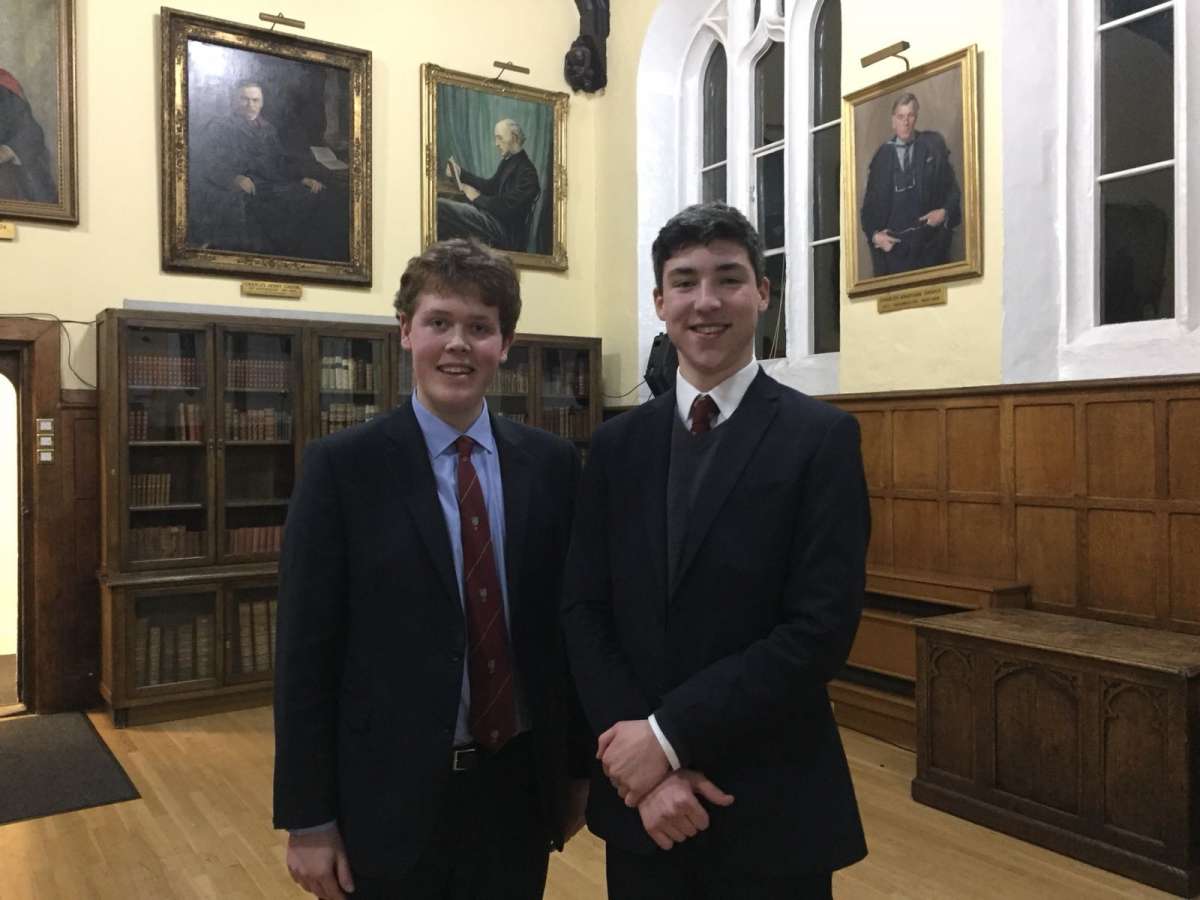 Following their victory in November in the English Speaking-Union’s Mace debating competition, revered debating partnership Matthew ‘Captain’ Cooke and James ‘the Wroester’ Wroe were pitted against English debating champions, Eton College in the second round.

Initial expectations were conservative to say the least, especially since previous Challoner’s debating world champions Dom Storey and Dan Chapman were knocked out by Eton in the very same round. It was felt early on that Matt and James would need the debate of their lives to beat the national champions, a College with such a large debating budget. Of course nobody is going to take a fixture against Eton in any discipline lightly, but considering their reputation, their title and the fact that they recently built an £18 million ancient Greek-styled debating chamber shook even the stoic Matt and James, creating a tangible nervousness that this would be the end of the line.

Determined to at least to make Eton remember the name ‘Dr Challoner’s Grammar School’, Matt and James began preparation soon after receiving news of the motion they were to debate: ‘This house would allow upper-rate taxpayers to divert a significant proportion of their taxes to charity’, for which they would be opposing. Preparation began with lunchtime brainstorming: who needs a multi-million pound debating chamber when you have N2, ‘The Home of Debating’? With help from Mr Spenceley and fellow debaters Matt Dagnall, Dan Cox and Soorya Thavaraj, points of contention were quickly identified and noted down without any need for a ‘debating coach’. Important also was identifying the main points and stance that would be taken by the proposition during the debate; and a lack of obvious proposition points began to raise questions. Could Challoner’s accomplish the impossible and beat Eton?

It won't be easy, but if anyone can beat Eton, it's the well-oiled machine known as Matt Cooke and James Wroe.

After several practice debates, Matt and James’ speeches had become smooth, composed of decisive rebuttal and hard-hitting points - however, the question still remained of how we could defeat the premier public school in the country. As the debate began all debaters were in their positions, the tension in the audience was electric as Eton opened the case for the proposition. In a shaky seven minute speech Eton’s first speaker defined the motion as allowing forty percent of the taxes paid by upper rate taxpayers to be donated to set list of charities. They then went on to raise some key issues about the debate. First, the notion that UK citizens have the fundamental right to determine where their tax money is spent, second the apparent inefficiencies of Government compared to charities; as well as an explanation as to why the motion only applies to the rich, centred around the idea that the rich have already ‘paid their dues’ back to society.

James responded in the opening speech for Challoner's by systematically demolishing the first speaker’s points, saying that we do choose how our tax money is spent through elections and highlighted how the Government is able to make decisions in the best interests of the whole country, in a way that a few individuals cannot. James then received a bizarre point of information (POI) about whether the government has the right to torture an individual if that is voted for. Eton’s traps were clearly not wily enough as James questioned the relevance of the ridiculous POI before moving on to the remainder of his speech which included a nuanced argument consisting of three key points. He discussed how taxes are not ours to spend and furthermore how that money was never really ours in the first place; how the motion would deny the government of money that it vitally needs and how the motion would by its very nature create a government of the rich. As James skilfully put it: 'Do we really trust Harry Kane to restructure the nature of the welfare state?'.

Do we really trust Harry Kane to restructure the nature of the welfare state?

Eton were eager to respond to James’ points and did so in their second speech which proved to be far better than their first, a reminder to Matt and James that despite the first half of the debate this was far from over with both pairs vying for a place in the next round. In their rebuttal Eton reminded us of their previously mentioned points and attempted to rebut James to, admittedly, limited effect. However the strength of this speech lay in its points, those brought up focused on going deeper into the idea that this tax does in fact belong to the rich since they have already paid their 'reciprocal duty' to the state; how both charities and government would be forced to become more efficient due to increased competition and how the motion would allow the country to get more out of taxation.

Next up was Matt 'Captain' Cooke to finish delivering the opposition’s points. At the start of his speech (because of the nature of Eton’s second speech) Matt found himself revisiting many of James’ points of rebuttal which Eton clearly failed to take in the first time, many of which he incorporated throughout his speech. With this dealt with, Matt delivered an entertaining speech covering the fundamental nature of tax and charity and how this motion simply does not fit with them. The motion would massively increase inequality in an already divided country, with particular reference to the north/south divide and how the nature of the motion fundamentally undermines the work of government, which is valuable to all. Notably Matt also received a pair of - tenuous to say the least - POIs focussing on war and abortion, to which Matt responded with arguably the greatest comeback of all time: 'That was a very interesting question considering I was talking about charity'. Fitting well with Matt's subtly ingenious style of debating, this was an excellent close to his speech.

That was a very interesting question considering I was talking about charity.

With the body of the debate over, it was opened to the floor which swamped the proposition with a relative tidal wave of questions as well as a smattering for the opposition before James began his summary speech, which served to summarise the case for the opposition and explain definitively why Matt and James had won this debate. This was an angle reciprocated in Eton’s summary speech; however who had got through to the next round remained a mystery until the end of two further debates.

After a rollercoaster of emotions across the past few weeks for Matt and James, the judge finally revealed that Challoner’s and Aylesbury Grammar would go through to the next round, the regional finals. With Eton defeated this raises the question of just how far Matt and James can get in this competition. Having accomplished the impossible once, this sets them further along the path to the final, and begs the question of when AQA will be rewriting the History specification to account for this truly inspiring event. This has broken new ground for Challoner’s debating by setting a record for the furthest reached in the ESU’s debating competition, and shown us a truly surreal occasion that will surely be remembered for years to come. The famous words 'well done to all boys involved' has never been more applicable.