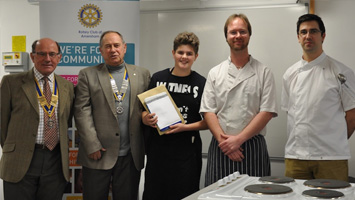 Frustrated with not being able to take part in the second round of this completion last year due to a school trip to Cologne (tough call, but a great trip) I decided to enter the Rotary Young Chef competition again this year.

The first round requires a healthy menu of two courses for two people, to be prepared in two hours and costing no more than 10 pounds. No easy task! Clearly lobster and caviar were off the menu where price was concerned and my favourite low fat, high fibre double toffee ice cream sundae can hardly be described as healthy - but I do like a challenge. The hardest part was in fact the costing, but Mum did a great job in Tesco making sure I didn’t go over budget! My menu was one of those selected for the second round, and that meant lots of practise. My family were my official tasters and deserve a mention for not complaining once despite having to eat the same thing for four consecutive days whilst I perfected my techniques.

Then, last Saturday morning, I was a little intimidated to find myself in a professional kitchen with five other boys from Years 7 to 10 - Adam White and Ross Back from Chiltern Hills Academy, and Barnaby Brooker-Mays, Matthew Smith and Finn Hynes from DCGS - all nervously eying each others' menus. We were judged by two professional chefs, a Rotary Chef and Adam Whitlock, the head chef at Gilbey’s restaurant in Amersham. Tension was high and it was quite scary to have the chefs prowling the kitchen observing and asking questions as we cooked - it felt just like MasterChef! Delicious smells filled the room and when the time was up the judges went around to each station and tasted our hard work. After tasting all the dishes the judges left the room to confer and decide the winner. This was our chance to taste what the other contestants had cooked. All the dishes were impressive, and I knew it was going to be a close one.

After a long wait the judges returned, along with the organisers of the event, to announce the winner. I was ecstatic when they called my name – the competition had been tough but worth all the practise. Congratulations also to Matt Smith, who came in third place. Now, however, the hard work starts: the next round is in three weeks, and in that I need to add another course to the menu but don’t get any more time. Perhaps that double toffee ice cream sundae might make an appearance!