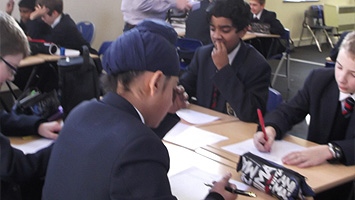 The Year 7 and 8 House Maths challenge took place in the Loarridge Centre on Wednesday 22nd January. There were two participants for each year – joining together to make a house team. I was in the Holman team along with Takumi Abe, Adam Ellis and Mohammad Karim. It was hosted by Mr Colquhoun and Mr Hamill. The first round was a group round; each team was given the same 5 challenging questions to do in 15 minutes. They were brain–boggling word problems, which required extremely methodical approaches. My team managed to answer four correctly (or at least we think so) – and we took a stab in the dark at the last one.

The next (and final) round was a pair round – where we had one Year 7 and one Year 8 in each pair. Pair A had to answer a question, check with the Sixth Form student if it was right, then a question would be given to pair B. The two pairs couldn’t confer and had to rely on the other pair to answer correctly in order for them to get a question. In Holman, Pair A completed 4 questions and Pair B did 3. After a good 45 minutes of mind–baffling maths, the results were announced.

We were all overwhelmed with our achievements, and happy for the Rayner victors. I thoroughly enjoyed this challenge and look forward to doing it next year (that is, if I get picked!).

In the Year 9 and 10 competition, the results were as follows: