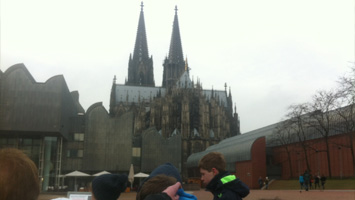 On Friday 24th January, 65 sleepy but excited Year 8s came to school at 05:30 for the hugely anticipated trip to Cologne. Once in Germany we enjoyed a tram ride into Cologne centre to see the extremely tall cathedral and had a walk across the Hohenzollern Bridge, which was covered in padlocks to symbolise couples' everlasting love.

The following morning we went up the 157m tall cathedral and saw some incredible views from the top. We were then allowed three hours' free time where we explored Cologne in groups of five and bought lunch. Many of us were amused by the Cologne public toilets, in which a robot cleans the toilet for you! That afternoon we went to the hugely popular Lindt museum where we saw how chocolate is made. Later on we went to the cinema to see Frozen or - as the Germans call it - Die Eiskönigin. On Sunday afternoon we went to see the local ice hockey team, Kölner Haie, play Düsseldorf in a derby match. Kölner Haie won 4-3 and as a present we were all bought a souvenir scarf.

It was a hugely enjoyable trip that will be remembered for a very long time.