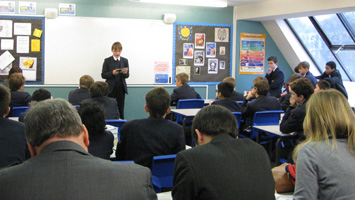 Challoner's annual public speaking competition returned this January giving us all 'Reasons to be Cheerful'. This topic was intended to brighten up a gloomy, cold start to 2014, whether this was by making people laugh or by getting the audience to think deeper. A change in the competition rules meant speeches had to be shorter than in previous years: at only three minutes long and with no use of PowerPoint allowed, students had to summon up all of their excellent presentation skills.

The level of creativity and enthusiasm was truly impressive this year. Subject matter was wide-ranging and included 'The Existence of Free Speech', 'Failure and its Link to Happiness', a psychological insight into 'What makes People Happy' and even, simply, 'Chocolate'! Boys used all sorts of methods to portray ideas: some used costumes, others props and even a few used accents and foreign languages.

The overall winners were Rishi Shah in Year 7, Jenson Thomas in Year 8, Finlay Carroll in Year 9, and Finlay Burrell in Year 10. However, all boys put in a tremendous effort and had a lot of fun in entering. A reason to be cheerful is that Challoner's has some great public speakers in its midst!