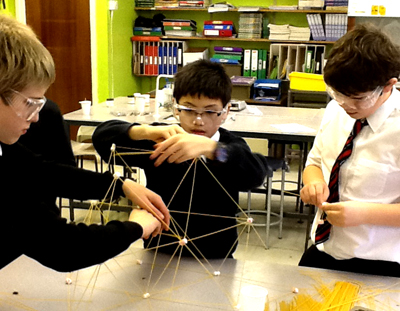 A group of year 8 students entered an annual science event competing against other schools in the county. There were five tasks to complete, where the outcomes required lateral thinking and knowledge from different disciplines.

The first task was to design a catapult that hit a target area consistently and marks were awarded for accuracy. The team had freedom to approach the second task with creativity, enabling them to win it as they adapted the rules and therefore avoided making assumptions. By far the best performance was designing a tower to accommodate an egg. Their design was textbook, utilising triangles for strength, however they didn’t quite focus on the design of the egg cradle at the top which led to the task failing. The other tasks which involved using buoyancy for a deep sea diver and thermo chemistry for coffee warmers were again very successful.

The team performed extremely well, demonstrating cohesive teamwork throughout the varied tasks and were very pleased to win the competition by 3 points.