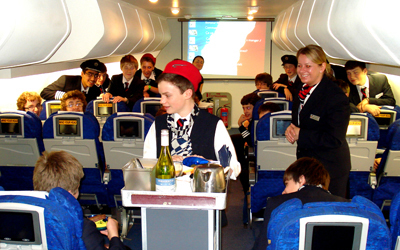 On Thursday 19th January 32 students from Year 10 enjoyed a day’s French Language workshop which was organised by British Airways. The morning comprised of a range of activities, from a game of Pictionary to re-enforce airline specific vocabulary, to donning uniforms to get into role as a member of check-in staff or cabin crew.

Having gone through Passport Control, the students were somewhat surprised to be directed into a mock-up aeroplane cabin. There was a focus on French pronunciation as a variety of announcements were read over the tannoy system. This was followed by the important security demonstrations and finally service of food and drinks, all in French!

After lunch they were treated to a tour of the Headquarters of British Airways at Waterside, an impressive building that affords a spectacular working environment. They were also fortunate to be invited into the executive suite and addressed by the Financial Director who re-enforced the importance of having language skills in today’s global world of work. The students acknowledged it had been a great opportunity to practise their language in such a real-life situation and all thoroughly enjoyed the experience.