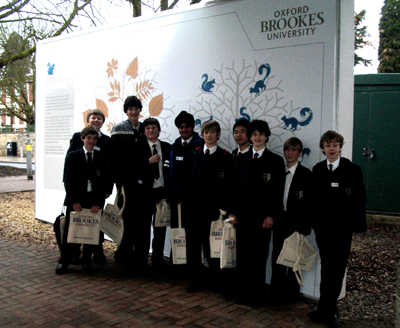 ‘Routes into languages’, a consortium of universities working with schools to enthuse students about studying languages, did just that when it welcomed 60 Year 9 students from local schools to their World of Work event in January.

Ten students enjoyed talks from Microsoft, Oxford University Press, and Prime Research (a global strategic marketing group), plus language taster sessions in Mandarin or Japanese. The day also gave our students a preview of university life including lunch with Oxford Brookes’ student ambassadors. We have many keen linguists at DCGS and sadly, could not take them all. The good news is that the national funding for this initiative has been extended for another year, so we hope to take another group of polyglots in 2012.

The message from the day was loud and clear – a language (even at GCSE) on a CV signals good intellectual ability, perseverance, and the potential to communicate well – habits and skills employers really value. Business is global, so if you can learn a language in addition to maths, business studies, economics or law, for example, the world could be your oyster!