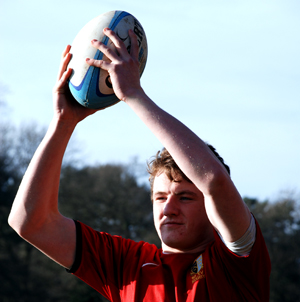 Jack, who is presently in Year 11, has taken big strides towards the ultimate goal of representing England by progressing through recent trials. Always a strong and dynamic player, his rugby development has continued to progress at pace over the past two years. Jack is an exemplary leader and is able to play a number of positions across the pitch, particularly excelling at second row.

He secured his Bucks County place after a strong trial in July last year; this was followed by a 10 Counties Development session where Jack was selected for the next stage of the trial process. At the start of the school year Jack earned a place on the School’s 1st XV team, despite being a Year 11 student, and this was followed by superb performances on the 1st XV Rugby Tour to Paris and Lille. Jack performed well during the South West England Trial, demonstrating his potential, and has been selected for the South West England Team to play in the Under 16 Divisional Festival in February. The England team is then selected as a result of performances seen over the weekend of the Festival.

We are very proud of his achievement in gaining selection for the South West England team and wish him the very best for the final England trial.