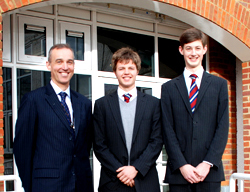 Many congratulations to the 19 students in Year 13 who have won offers of places at Oxford and Cambridge Universities this year. For the students concerned, this represents a fantastic achievement having tested themselves against some of the best brains in the nation.

One particularly noteworthy aspect of this year’s tally is the extraordinary success of our Mathematicians who won eight places between them, almost certainly a record.