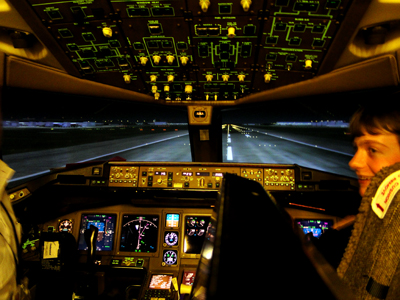 Last week 4 lucky students had the chance of a lifetime when they won the fantastic prize to fly a British Airways 777 flight simulator. Daniel Thomas, Vishal Thaker, Murray McCreery and Nick Kirby took to the skies after their promotional Maya video won a competition organised by Languages and Graphics to help British Airways promote its Language Flag Award.

The £10m flight simulator was an exact replica of the cockpit of a Boeing 777, with all the buttons, levers, screens, meters and more. The would-be pilots sat in the co-pilot seat and practised take off and landing at airports around the world. Dan said, “The simulation was so real I actually thought I had tonnes of plane and passengers behind me as I pulled up on the wheel and the hydraulics lifted the front of it up. There was a real sense of depth in the panoramic screen and I actually got a bit nervous as I flew past all the buildings and the Statue of Liberty, and then in to land. That didn’t go too well as I swerved all along the runway. But you’ll be pleased to know that landing a plane isn’t as hard as it looks!”

They also had the chance to see cabin crew safety training in action, with a cabin being evacuated in an emergency drill. All in all it was the trip of a lifetime – even though they only went to Heathrow! Many thanks to British Airways for their generous support, and we look forward to the next Language Flag competition!