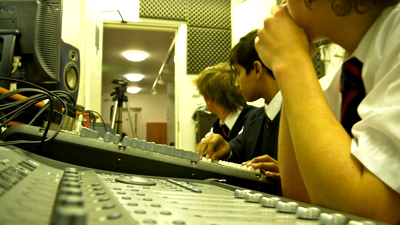 Mrs Ryde secured a visit to SKY Radio to enable students to experience a ‘live’ media environment in anticipation of the planned DCGS broadcast on 15th December. This followed a six week Radio Broadcasting course that was run by Mr Grant in the Music Technology suite, where the students learned how to handle the equipment and prepare material for the day long event. If any inspiration was needed to encourage our team of broadcasters to reach for the stars during their own live performance, a visit to such an interesting place was going to provide it!

A group of sixth form electronics students and Year 11 radio enthusiasts spent an afternoon touring the radio and TV studios where they were treated to a sneak preview of the new HD studio. The students saw a live delivery of news at Sky 24 and were then offered the chance of watching ‘Live at Studio Five’ from the recording area, which gave them a great insight into the pressures of live recording. They ended the day by visiting the mixing studio where teams were queuing music, videos and interviews.

The students returned full of enthusiasm and with many ideas to incorporate into their broadcast the following day. Their material included live raps, guitar solos and an original play based on A Christmas Carol. It is thanks to opportunities such as this SKY visit that enriches the student’s understanding. No wonder then, that their DCGS radio day was such a success!