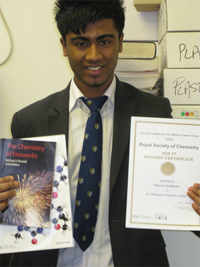 The Royal Society of Chemistry has announced the results of the online Chemistry Olympiad competition. Year 13 student Sujeevan Sivathasan was awarded joint first place in the country, along with only 16 other students. He gained full marks in the competition which was an outstanding achievement.

This is an annual competition open to all lower sixth form students in the UK. Every student who participates receives individual feedback on their performance, broken down into the main areas of Chemistry. The competition is supported by an educational grant from INEOS, the world’s third largest producer of chemicals.

Sujeevan was rewarded with Olympiad material, Chemistry textbooks and £25 in recognition of all the hard work that he had obviously put in. The competition will run again from June 2010 and we look forward to seeing our students taking part with such enthusiasm as always.