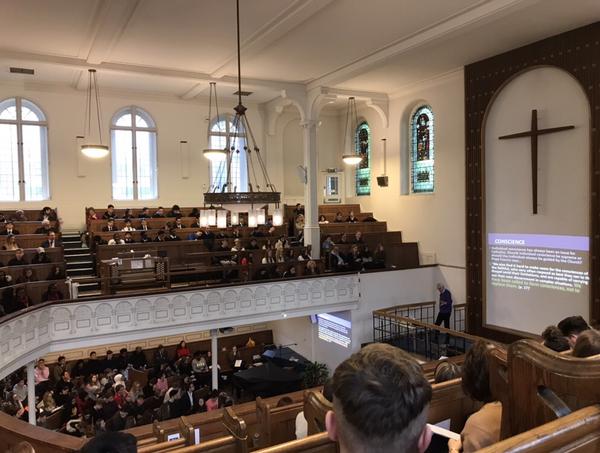 A Level Religious Studies students recently had the wonderful opportunity to attend the Candle Philosophy Conference in London. The lectures took place in the stunning Bloomsbury Central Baptist Church, located at the northern end of Shaftesbury Avenue. The lecturer throughout the conference was Dr Peter Vardy; a philosopher, theologian and author who has been heralded as 'one of the leading experts of religion and values education in Britain, Australia and New Zealand'. He has written many books on the subject - in fact I even brought my copy of his The Puzzle of Ethics along with me!

Dr Vardy gave us a lecture on natural law, a law-based system of ethics created by the 13th century Dominican monk St Thomas Aquinas after he read the works of Aristotle. Rather than concentrating solely on Aquinas, as we had done in class, Vardy took us on a whistle-stop tour of the more modern forms of natural law. We first looked at the hardline approach of John Finnis, but then contrasted it with Bernard Hoose, who presented his form of natural law called Proportionalism which suggests that acts are not always as they seem. Thus, the situation must be taken into account. In any case, Vardy stressed the importance of treating these separate forms of natural law as completely separate, not as one wholly uniform theory.

We then moved on to something that the Challoner's students were looking forward to - the debate! The motion was 'This House believes that given the right situation, even murder is permissible.' We were extremely well represented during the course of the debate - three students from Challoner’s participated, including George Corby, who spoke proudly of the actions taken by Tony Blair’s peacekeeping forces in Kosovo and that whilst some lives were inevitably lost, the overwhelmingly positive impacts of Blair’s intervention are still with us today. Following that a vote was taken and I am happy to say that the motion was passed. With that settled, we broke for lunch.

After lunch, we returned to our seats and Dr Vardy lectured us on the arguments for God. Whilst he said that not many Christians when asked would cite an ontological argument as the basis of their faith, Vardy said that it is nevertheless essential for anyone studying Christianity as a whole. We looked in particular at the Religious Experience Argument, which says that God must exist because of the many recorded visions. An example of someone who had a vision was Sir John Polkinghorne, one of the greatest scientists at the end of the 20th century, who became a Christian in his late 50s because he had a profound religious experience.

Overall it was a thoroughly enjoyable and extremely informative event, and throughout, Dr Vardy stressed the absolute importance of analysis and evaluation, for which 60% of the marks are awarded at A Level. I would like to thank, on behalf of everyone who attended, Mr Wallington-Smith and Mr Deakin for organising and accompanying us on the trip, and also extend a word of thanks to Dr Vardy himself, who has made A Level RS a whole lot easier!