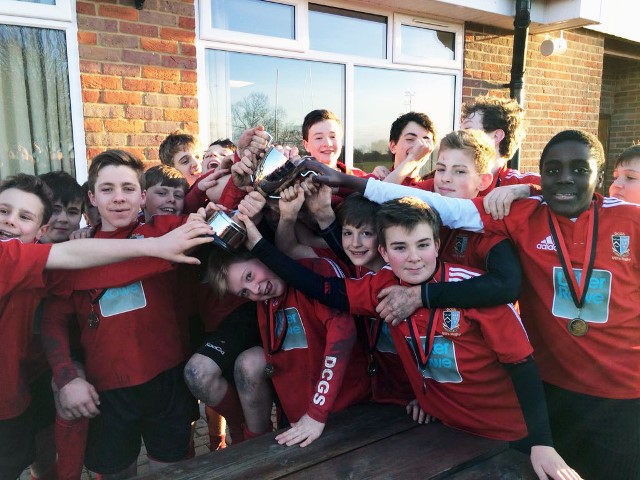 The Year 8 rugby team travelled to Aylesbury Rugby Club last Wednesday to play in the Bucks Cup final against RGS. The game kicked off and Challoner’s soaked up some early pressure with Ollie Walter, Rob Treloar and Ben Harper putting in some big tackles. After 15 minutes the breakthrough finally came when some good work by the backs set up Theo Weatherall to crash over before Alex Bower added the conversion. RGS replied quickly but couldn’t get the conversion to make the score 7-5 at half time in an intensely close match.

The second half started well with good carries and breaks from Ben Eggleton and Max Morphey. Angus Love was equally sharp around the rucks to get quick ball. This eventually proved to be beneficial for Challoner's as Christian Grint picked the ball up around half way and beat three men before scoring under the posts. Alex again added the conversion. Grint then scored again in the corner after a great break from Alex Bower to make the score 19-5 to Challoner’s. The last 10 minutes saw RGS pile on the pressure and score themselves but it proved to only be a consolation as Challoner’s sealed the win 19-10. Congratulations goes to the 22 man squad for the win but also for a terrific season.